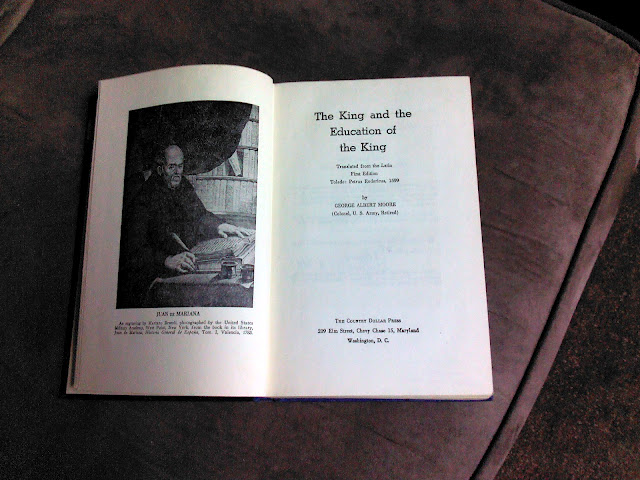 For years now, since moving away from Baton Rouge and LSU’s library, I’ve been trying to get my hands on the English translation of De Rege et Regis Institutione (The King and the Education of the King) by the Spanish Scholastic Juan de Mariana.

The book is available for free on Google Books in its original Latin, but my Latin is rather rusty. The English translation by George Albert Moore, however, is much harder to come by, being out of print due to copyright, the perverse academic publishing model of  limited print runs aimed at university libraries for outrageous prices, and lack of sufficient interest to reprint it. I do not see why Google would not have scanned it and put it online too were it not (I assume) still under copyright.

Availability of the Moore translation seems to be largely limited to some university libraries. As an online instructor, I don’t live anywhere near my university’s library. And with two young kids, it’s hard to get out  and hunt down a copy at a nearby university. Occasionally I’ve found it for sale online, but always for outrageous prices. I’ve waited and waited for the price of a copy to come down below $100, so I could talk myself into buying it, but it’s never happened. The cheapest copy on Amazon right now is priced at $275 used.

Why am I so interested in this book? Well, mainly for two reasons: one scholarly, the other pertaining to fiction research. De Rege contains an example of state-of-nature theorizing 50 years older than Hobbes’s Leviathan and a defense of limited, mixed, constitutional government before Locke and Montesquieu. I discuss this in my working paper “On the Origin and Poverty of State-of-Nature Theorizing,” which I’d like to finish it someday. De Rege also belongs to the “mirror for princes” literature.

They are best known in the form of textbooks which directly instruct kings or lesser rulers on certain aspects of rule and behaviour, but in a broader sense, the term is also used to cover histories or literary works aimed at creating images of kings for imitation or avoidance. They were often composed at the accession of a new king, when a young and inexperienced ruler was about to come to power. (Wikipedia)

Machiavelli’s The Prince is a perversion of the mirror-for-princes literature, intentionally turning the literature on its head by teaching a ruler how to acquire and maintain power rather than how to be a good ruler in the moral sense.

The first book of my planned epic science fantasy series will be titled A Mirror for Princes, will feature an example or two of the literature, and will itself be an addition to the literature in the broad sense quoted above. So naturally I want to get a better feel for how this literature is written, what subjects it covers, and so on.

Mariana also defends tyrannicide. So there’s that too. 🙂

I finally decided to get my hands on this book by requesting it through InterLibrary Loan (ILL) at my local public library. Now I have hours of slogging work ahead to free The King and the Education of the King from its mortal coil.

Geoffrey is an Aristotelian-Libertarian political philosopher, writer, editor, and web designer. He is the founder of the Libertarian Fiction Authors Association. His academic work has appeared in Libertarian Papers, the Journal of Libertarian Studies, the Journal of Value Inquiry, and Transformers and Philosophy. He lives in Greenville, NC.

Comments on this entry are closed.